Food Similes in Consider the Oyster 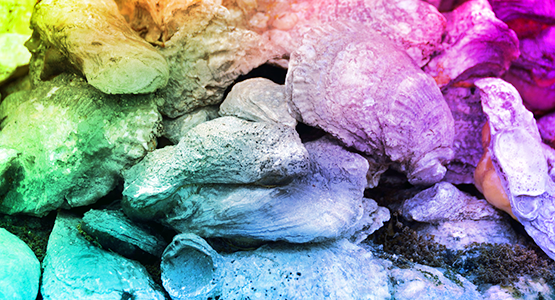 M.F.K. Fisher’s Consider the Oyster is a series of short essays dedicated to the life, death, and culinary potential of the oyster. Many of the chapters contain descriptions vivid enough to make the reader hungry. The narrator often explains what it is like to eat an oyster through multifaceted similes.

In “A Lusty Bit of Nourishment,” the reader learns that oysters are different depending on where they are harvested, and therefore they are also prepared in different ways:

Others … say that Southern oysters … need some refinement, being as they are languid and soft-tasting to the tongue.

They are, you might say, more like the Southern ladies than the brisk New Englanders. They are delicate and listless … and ice is scarce, or used to be … and the weather’s no good for saving; best cover the bayou-molluscs with a fine New Orleans sauce …

But further north, men choose their oysters without sauce. They like them cold, straightforward, simple, capable of spirit but unadorned, like a Low Church service maybe or a Boston romance.

And oysters of the North Atlantic Coast are worthy of this more of less unquestioning trust. They are firm and flavorful, and eaten chilled from their own lower shell with a bit of lemon juice squeezed over them they are among men’s true delights.1

This excerpt compares oysters to people and cultural practices. This kind of simile is an apt choice for several reasons. First, it compares something possibly unfamiliar to the reader—the oyster—to regional trends, which are probably more familiar. Second, the two things compared are actually related; the oyster from the South is like the woman from the South.

Third, this simile makes a way for the narrator to employ adjectives that fit both the food and the people. The Southern oysters are languid, soft-tasting, and listless, and best when covered with sauce. These words are aurally appropriate: the l’s and s’s sound slow and creamy. They evoke more than simple favor and texture; they evoke a personality. The reader can now think of oyster-eating as something more rich and nuanced: because oysters are compared to people, eating sounds more like a complex relationship with the food than mere nourishment, or even mere enjoyment. Eating becomes like a friendship because the food becomes more human.

The Northern oysters are brisk, cold, straightforward, unadorned, and firm. They are like a Low Church service or a Boston romance. Again, these words are aurally appropriate: the harder sounds evoke a harder personality. But there is also another side here—the oysters are not brittle or harsh; they are capable of spirit and flavorful. These particular adjectives and similes bestow a great honor upon eating. They compare a meal to things that may be considered “higher” goods—people, cultures, religion. The Northern oysters are compared to a Boston romance—this evokes a kind of subtle, deep emotion in the flavor and texture of the oysters. They are compared to a Low Church service—this evokes a kind of reverence in the oysters, which is high praise for a food.

Within this same excerpt, the narrator also inserts how these two kinds of oysters would be best prepared. Southern oysters are best warm in some kind of sauce, while Northern oysters are best on their own, chilled with a little lemon. This information does two jobs. On a basic level, this information educates the reader on how to eat different kinds of oysters. On a more metaphorical level, this information again reinforces the two contrasted personalities: warm sauce fits with a softer, more languid oyster, and coolness combined with the tartness of a lemon fits with a firmer, straightforward oyster.

The goodness of a grilled oyster is difficult to explain to the uninitiated; they’re custardy in the middle, crisped around the edges, somehow both more and less oceanic than raw ones. You tend to eat them so fast that the memory is only a ghost that, when summoned, demands more.2

Like Fisher, Clement chooses aurally appropriate adjectives to describe the oyster. They are custardy and crisped, two words that begin with the same sound and end differently. This emphasizes that one grilled oyster contains two contrasting consistencies. The u and s of custardy are soft while the i and p of crisped sound actually crispy. The memory is only a ghost may remind the reader of the oyster farmers who also appear in the story, especially Bart Robbins, an elderly, almost-ghostly man whose “nose is carved away on one side, the aftermath of a lifetime on the water in the days before sunscreen.”3

Fisher and Clement’s similes help readers to see oysters—and possibly food, in general—in new ways. In Fisher’s own words, there are “almost as many ways to eat such a simple dish as there are men to eat it.”4

Betsy K. Brown is a writer and teacher who lives in Arizona. She received her Master of Fine Arts in creative writing from Seattle Pacific University.