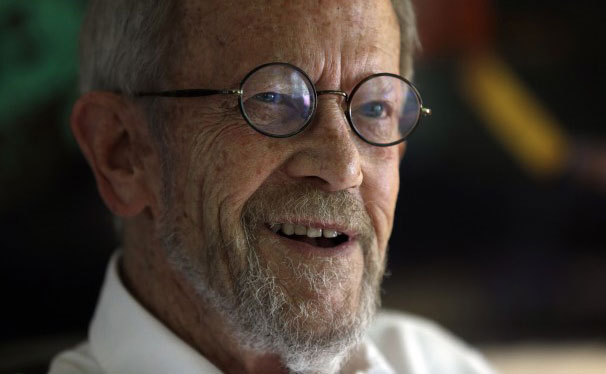 Elmore Leonard recently died. In a career spanning sixty years, the 87-year old Leonard was a prolific (over eight million copies of his books are in print) and eventually (like us all he had his early rejections) hugely successful writer—about forty novels and hundreds of short stories. He died working on his 46th novel. “His prime never ended,” one critic noted.

Leonard came from a background in advertising and western pulp fiction. His writing was so unpretentious that the general public along with most serious (and many pretentious) authors consider him a great, not just genre, writer. I do. So did PEN, which called Leonard’s work “Some of the best writing of the last half (20th) century.” He deserved and won many literary awards.

His fans could count on the fact that each new Elmore Leonard book promised and delivered a juicy read. Several became movies. One of the best presents I ever got came from one of his long-time editors, who on learning I was a Leonard fan, sent me a box of all his paperbacks – a treasure of enjoyable evenings all in one package.

Leonard’s books were peopled with amiable, if scary, “louche characters,” “smooth operators” and “charming bumblers,” mostly Miami and Detroit lowlife, recent obit-editorials commented. Most critics conclude his work was “some of the best crime fiction ever written.” I’d say, and more. His unique touch, tight descriptions and street dialogue composed a unique model of precise communicative writing. “Mr. Leonard’s books did most of their work through dialogue,” book critic Janet Maslin wrote in The New York Times. He had an ear for dialogue and phrasing. He “stripped the form of its worn-out affectations,” one commentator said. Script writers on a TV series adapted from one of Leonard’s characters wore wrist bands, “WWED,” (What would Elmore Do) a bow to Leonard’s deft dialogue. Critic Maslin pointed out that Leonard’s unique literary “flair is hard to borrow, because much of it depends on what he did not write, not what he did…there was great elegance to his elision.”

I like Leonard’s Rules #10 and #11 best. They sum up the key to good writing. Not making it seem like writing. I often tell writers to focus on #10. Self-editing is difficult but necessary. Leonard’s Rule #10 means writers need to cut out the excess writing that readers don’t need or want. We must be tough on ourselves; we’ll know what really has to go when we see it.

I’ll end with an anecdote writing teachers will love. One of my author/clients came to me with a book idea he had been told by several editors was NOT a book. I thought otherwise. He asked what he should do since he'd never written a book. He was a lawyer and we lawyers are taught how to write badly. Since his story was a true crime thriller, part terrifying, part funny, I told him to buy a few Elmore Leonard novels, read them, pay attention to the writing, and go someplace quiet without any notes and write his terrific story. He did. It sold for $80,000 and the book was later optioned for a movie for nearly two million dollars.

What a writer Leonard was; and what a teacher to writers. I wonder what AWP writing teachers think about his rules, and whether they have better—or other—ones. If you do, send them to me, and if warranted, I’ll compile them in a follow-up piece.

Ronald Goldfarb is AWP’s Counsel. He is a Washington attorney and author whose books include Clear Understanding: A Guide to Legal Writing (with James Raymond).

R.I.P Elmore Leonard. And that is an interesting list of rules for good writing. I totally agree with #1. As for #10, how do you know what parts readers tend to skip?