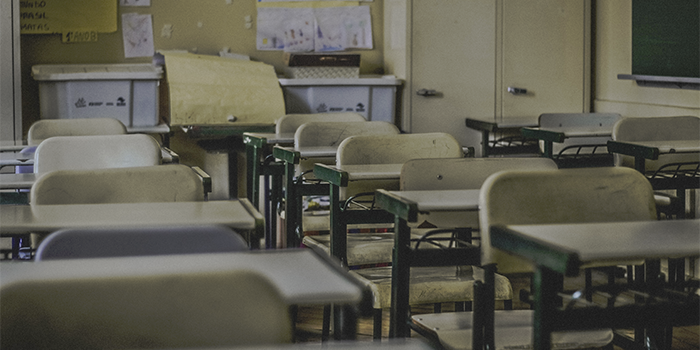 The room is hot and sardined with 40 or so gangly teens, young writers, and I wince and turn toward the root. Cristina.

The class quits talking minus a few stifled gasps and a crop of girls huddled in the back by the window, chuckling to themselves.

“Active Shooter!” Cristina snorts at me like it’s an inside joke and I’m the outsider. “It’s on the wall.” She’s pointing to a plastic instructional sign with those rounded, androgynous figures in various poses beneath the headers “RUN,” “HIDE,” and “FIGHT,” near the door to the classroom. Found poetry.

It’s midafternoon and sun’s coming in from the classroom windows, honeying everything. It’s also the first day of Publishing House, an elective course designed for students who are attending the summer creative writing program to create a literary magazine that will feature student work. We’re deliberating on the title of the magazine, collaboratively giving our future creation a name, when Cristina throws out Active Shooter.

Cristina has an inner boldness. She has some home issues she’s let slip before, though never got into the details.

“Active Shooter,” is what I repeat aloud to the class, as I’ve done with every suggestion before this one. The chalk sweats in my hand. I scribble the language on the chalkboard’s word mosaic. Gradually, the young writers’ voices start rebalancing the day.

We have reached a heartbreaking era in the United States in which the threat of active shooters is rampant. And to no resolve. School campuses are simultaneously places of learning and potential crime scenes.

What good does art do in this reality?

As a poet and teacher trying to navigate this climate of mass shootings and violence in school settings, I feel helpless. What’s the point of teaching and understanding when the constant threat of active shooters lurks in the backdrop? How do we cultivate empathy and understanding in both teachers and students when, across the country, empathy is tested by large-scale acts of violence in the very places we are cultivating that empathy in, which are also spaces that are supposed to be safe?

“I have no idea what you’re talking about.” Cristina’s shaking her head. A few others chorus in.

Today’s lesson is on turning abstract language into the concrete, the specific. We have just read Nick Flynn’s poem “Bag of Mice,” about his mother’s suicide, and are discussing a passage from Richard Hugo’s The Triggering Town:

“So you are after those words you can own and ways of putting them in phrases and lines that are yours by right of obsessive musical deed. You are trying to find and develop a way of writing that will be yours and will [. . .] generate things to say. Your triggering subjects are those that ignite your need for words. When you are honest to your feelings, that triggering town chooses you. Your words used your way will generate your meanings. Your obsessions lead you to your vocabulary. Your way of writing locates, even creates, your inner life. The relation of you to your language gains power.”

“In the middle of a war you can’t see, you still want to look,” writes Leslie Jamison in her essay collection, The Empathy Exams. She is describing an essay passage Joan Didion wrote about the way fear imposes during civil war: “Fear isn’t something with a particular scent or ting, only something in the air that makes it difficult to breathe. It won’t respond to any name when you call it into the light.”

“Bag of Mice!” I holler and dump a bunch of colored pencils and crayons on the table. The class grows quiet. “Take out last week’s Nick Flynn poem,” I say. I pass around sheets of drawing paper with two empty rectangular boxes on them.

“We are going to read the poem aloud,” I tell them, “and after, turn it over, and in the first box on your drawing sheet, draw the poem from memory, from how you feel.”

I read the poem out loud slowly, three times, and then have three volunteers take turns reading it aloud. An incantation.

When they are finished with the first drawing they are to turn the poem face up, reread it silently to themselves, and draw it again in box two, making note of any details they might not have noticed in the first reading.

After everyone shares their drawings and reflections, the students write their own “I dreamt” poems that imagine something that terrifies them.

“Ok?” I quietly ask Cristina as I make my rounds to see if anyone needs help. She quickly nods and gets back to her poem.

I dreamt your suicide note
was scrawled in pencil on a brown paper bag,
& in the bag were six baby mice. The bag
opened into darkness,
smoldering
from the top down.
(from “Bag of Mice” by Nick Flynn) 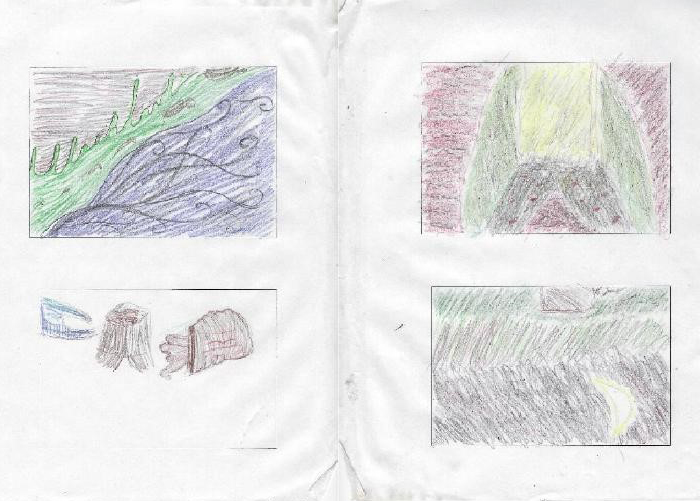 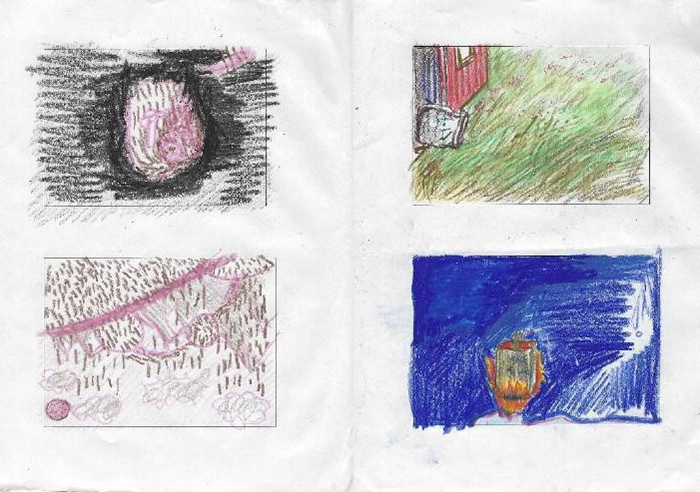 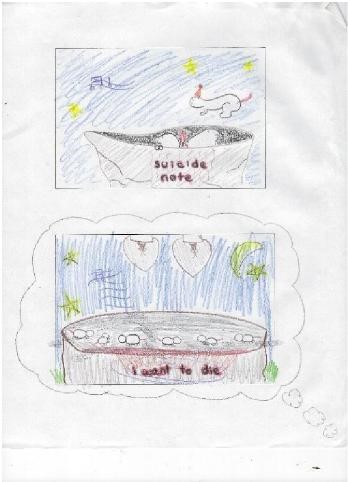 When I’m teaching poetry I’m not “teaching poetry,” I’m teaching humanity, and that entails reaching kids in any way to access both art and life, giving multiple points of entry. Even though the pain Nick Flynn felt after losing his mother to suicide was so big and terrifying and his alone, as readers the students were able to understand if not totally empathize with that pain and terror through the specific details and idiosyncratic world Flynn creates in “Bag of Mice.”

However, as writers who are thinking and writing about their own personal fears and experiences, my students were stifled by the abstract language. How did Flynn’s details relate to their own writing and experiences? Drawing the poem was useful because it gave them a way to take the mental images they created in their minds after reading the poem and see them visually. After they drew those images and saw how they and their peers each see in their own unique way, the tension was alleviated and they were empowered to try to write their own poems about their own experiences using language that shows how an experience is specific, whereas the emotions and concepts surrounding the experience are universal.

I think most teachers would agree that, above all, we care deeply that our students succeed at learning. But in a world of mass shootings, I do fear going to school. As a teacher, I’m supposed to be the one who “knows what to do,” but the reality is that nobody has a viable answer to what’s happening in our country. A drill can’t prepare you for the terrifying, real emotions or unpredictable variables in an active shooter situation or its aftermath. To that, however, I will say that a natural response to this tumultuous climate is poetry.

The function of art has never been, and can’t ever be, directly shielding someone from a bullet. That’s illogical. That’s jamming the wrong key in a keyhole and not getting why the door won’t open.

Nonetheless, in the aftermath of school shootings, communities have turned to art to begin the process of healing. After the shooting at Marjory Stoneman Douglas High School in Parkland, Florida, 80 students attended a summer camp called “Camp Shine” where, as NPR’s Jessica Bakeman put it, “students got group therapy disguised as music, theater and art activities, like painting both sides of a mask, the outside portraying the face they show the world and the inside, their true self.”

I don’t believe art is therapy. However, art’s ability to create common ground lends itself to healing and humanizing one another, which is a continual process that we need to work on every day. The fact that Camp Shine provided group therapy “disguised” as art activities, that we as a society historically turn towards art after traumatic events take place, advocates for the necessity of art programming in our education systems. If these artistic outlets had been made available before the shooting, could it have been avoided? While impossible to know, it’s clear that art has a powerful, positive influence on our worldview.

Art is a way we expose. Writing and artmaking give students the ability to imagine, from inside their own or another’s mind, what’s happening to the world around them and create their own individual “scent” or “ting” for the fear that’s stifling their learning environments. “Because trauma can be shadowy and hard to pin down, creative expression is a way to access what children can't see or say.” Through writing and artmaking, students gain the ability to drag that fear into the light and expose it. Only at the point of exposure of fear can we then begin to further excavate and better understand these difficult truths about human experience that reach beyond language. It’s not just poetry. It’s how to be a person.

Only when Cristina recognized that sight can also happen inside us was she able to visualize what her fears looked like. Though the specifics of the challenges she faced at home were not made explicit to me, she was free to give her pain its own language. She always had a voice, but now, through poetry, she has a means by which to see that voice and to be seen by those who read her.

A week after the “I dreamt” poem assignment, class had been canceled for a snow day. Despite the time off, Cristina emailed me her completed poem.


I cannot see anything, though I am not blind.
I can grip and eavesdrop and take small cautious bites and scrunch my nose at the hint of a foul
odor.
I cannot see, but I never could. None of us could. None of us will ever see with our eyes.
Yet we sit in wait for a light, some sort of sign that we may add sight to our already
Minute collection of senses, and
One has vision.
They look to the left, to the right, looking without
Licking the walls, caressing this corrosive landscape. I can see. We can all see now.
It is light and bright and utterly terrifying. Bring us back, we crave darkness, we are
Nourished by shadows, by ignorance
Please we yell to some deity that is unnamed and most likely imaginary.
We stumble over ourselves because vision is so new
And we claw at our eyes, gauging out
The sun that has lit up the stony cave we all knew too well.
We are free, once again
We live in the shade of our own thirst for illusion.
We can feel
The sticky gooey droplets of a substance we can finally describe run down our sunken cheeks
The smell of meat and sweat and tears
The taste of metal and cornea, yes, we are truly blind now.

Carlie Hoffman is the author of This Alaska (forthcoming from Four Way Books). A recipient of a 92Y/Discovery Prize and an Amy Award from Poets & Writers, her writing has appeared in New England Review, Conjunctions, Boston Review, TriQuarterly, North American Review, and elsewhere. She lives in NYC and teaches writing at the Fashion Institute of Technology and Purchase College, SUNY.

Fetters, Ashley. “The Developing Norms for Reopening Schools After Shootings.” The Atlantic, August 27, 2018.