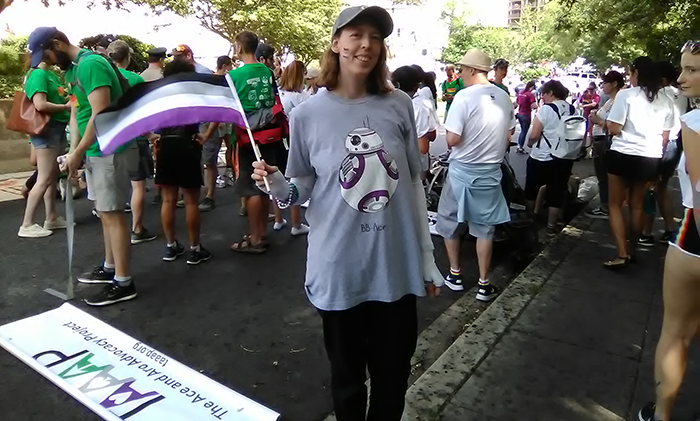 I am a strong proponent for diversity in books. I stand behind movements like #WeNeedDiverseBooks and #OwnVoices because I believe everyone should have the joy of finding themselves represented in fiction. There is great power in relating to a character’s struggles but also their victories. We all deserve to be able to see ourselves as the hero, not just supporting character thirty-nine in the background.

I think one of the reasons I read so many books is that I’m still waiting to find myself represented in one. Over the years there have been so many characters I could relate to in one small way or another: Hermione Granger’s “When in doubt, go to the library!” nature, Hercule Poirot’s sidekick Captain Hastings’s loyalty and imagination, Lucy Pevensie’s kindness, even Eeyore’s ability to take a disappointment and turn it into happiness. As a child, teenager, and adult, I have found parts of myself in thousands of well-developed, relatable fictional characters. But have I ever found anyone exactly like me? Not yet.

I’m not looking for a shockingly accurate depiction of an introverted, middle-aged vegetarian living in the DC Metro area who maintains a website for a nonprofit, has two cats, is addicted to puzzles, and leaves books in public spaces for strangers to find (though, if you know of a book with that character, please let me know because I believe royalties are in order). I’m looking for someone like me in some significant ways that mainstream characters are not like me. I often read books in the LGBTQ+ genre, not only because I greatly enjoy these stories but because I hope one day that little plus sign at the end there will actually show a character that represents me.

Several times, I dissolved into tears while reading Girl Mans Up by M-E Girard, as the main character’s gender identity is the closest thing to mine I’ve found in a book so far. That moment when a character thinks something that you’ve thought as well brings an intimate kind of relief and powerful validation. But I’m still quite different from Pen, the main character of that novel. The term I identify with—genderqueer—is a wide net. And, yet, there are still so few characters in literature it might apply to and even fewer who explicitly choose it as their term, too. Creating characters with loosely defined gender identities doesn’t often read well on the page. How does an author describe the gender identity of someone who is a combination of genders or fluidly, rapidly changing genders or otherwise nonbinary? It takes skill and understanding. Few authors even attempt this difficult feat.

It is easy to use a recognized term to describe a character as something, but it is far more difficult to describe a character as some amorphous other. At a writing workshop, I shared a piece I had written that featured a genderqueer character. Like me, this character doesn’t identify with pronouns, and I had attempted to write the short story in third person (a mistake I will not replicate). After thoroughly confusing half of the group, I then went back and forth with one writer who simply could not wrap his head around a character who was both male and female. After the fifth explanation of “genderqueer is an actual gender identity” and the fifth reply of “but what is the character, really? Does it have man or woman parts?” I started to feel like the problem did not lie entirely with my writing but with concepts not all readers yet buy into.

Still, the resistance some readers might have to characters of diverse characteristics is not a reason to exclude them from our writings. I would argue that it is all the more reason they should be included (though perhaps written in first person, for those who resist pronouns).

LGBTQ+ includes individuals with both nonnormative gender identities and nonnormative sexualities. And that’s where the little plus sign includes me again.  After attending Pride events and being out as asexual (ace) for years, I marched in Washington, DC’s Capital Pride Parade for the first time this month with The Ace and Aro Advocacy Project.

Finding good asexual character representation is difficult. It harkens back to earlier decades where gay characters were not labeled as gay outright, so the reader had to infer it based on the character’s lack of interest in partners of the opposite gender. A character who seems to have no interest in sex might indeed be asexual, but unless it’s explicitly stated on the page, the reader can only speculate. This is especially difficult in genres like historical fiction or fantasy where the term doesn’t exist. But there is a power in moving from the ambiguous to the explicit. A character whose asexuality is hinted at or only loosely described will not ring true with asexual readers desperate to see a character that reflects them. A number of negative tropes and stereotypes also exist involving suspected or confirmed asexual characters.

During several panels I’ve attended at conventions, panelists and audience members attempted to list the positive portrayals of asexual characters in movies, television, and books; we never filled up more than two flip chart pages. Of those, I don’t even need both my hands to count the number who are main characters. There is a societal expectation that a person be attracted to someone, so that same expectation exists with readers. When deciding how a character should relate to others, attraction of one sort or another is taken for granted. Attraction can drive entire plot lines; just ask Romeo and Juliet. So to create a character who doesn’t have this element might make the character feel underdeveloped or lacking. Yet those of us who identify as asexual crave accurate, positive representation and know there are plenty of exciting plotlines for these characters that don’t have anything to do with who wants to sleep with who.

The famous quote by Dr. Stephen Shore “If you’ve met one person with autism, you’ve met one person with autism” can be applied to those of us in the LGBTQ+ community as well as to LGBTQ+ characters. Each character has a distinct way of perceiving, navigating, and interacting with the world. An LGBTQ+ character can bring value to a piece and educate readers simply by existing, but no one character can represent an entire identity or orientation. We need good writers who can express complexities and nurture a character’s unique truths within a story. There are all kinds of people in this world, and so we need all kinds of characters.

Kate McDevitt received a BS in computer science with minors in creative writing and mathematics from Virginia Tech. Also at Virginia Tech, Kate worked on an MS in computer science. Kate has designed and developed websites for many educational, governmental, and commercial organizations. In addition to writing genre and young adult fiction, Kate leads a local writers' roundtable group, volunteers at local libraries, BookCrosses, and hunts historical markers. Kate joined AWP in 2006 and is the Director of Web Services & Systems Administrator.