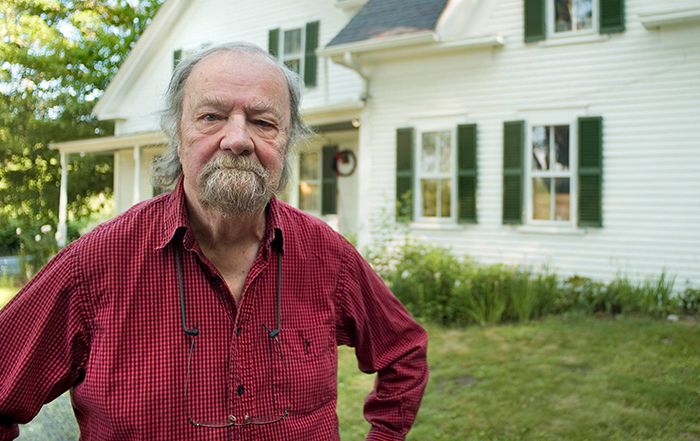 Looking ahead to the Donald Hall tribute at the next AWP Bookfair & Conference in Portland, I am rereading hundreds of letters from Don. Earlier, I shared the first postcard Don ever sent to me. Here's an excerpt from one of the last letters I received, dated December 7, 2017:

"I'm glad you could recognize my old poems in my little collection [The Selected Poems of Donald Hall]... Recently, I have been admiring some of the later rhymed and metered poems. Most of my life has been free verse, like most of 'Kicking the Leaves', but I've come to like some of the late, mostly-Jane poems that I've written out of my love for Thomas Hardy. 'Her Garden,' 'Summer Kitchen,' 'Pond Afternoons,' 'The Wish'... Nobody seems to be doing much that's formal any more, and most of the stuff I read in magazines does not make a sound when read aloud."

I learned so much from Don about the importance of sound in poetry, the "music" of poetry. I'm including here NPR's video remembrance of Donald Hall from June 25, 2018 (broadcast shortly after Don's death). It includes earlier interviews and Don reading from his poetry.

I hope to see folks join us at “Poetry, Belles-Lettres, and Other Correspondence: A Tribute to Donald Hall” with Mark Doty, Barbara Hamby, Alicia Ostriker, and others TBD. This event will be held on Friday, March 29 from 3:00- 4:15pm PST, in the Oregon ballroom 203, Oregon Convention Center, Level 2 at #AWP19 Portland next month.

Martin Lammon, the founder of Georgia College’s MFA program and the journal Arts & Letters, first met Donald Hall in 1980, and they shared poems and letters for the next 40 years, just before Hall passed away. Their interview “Flying Revision’s Flag” was published in the first issue of the journal Kestrel (1993), another journal Lammon started in Fairmont, West Virginia, and appears on the Academy of American Poets website. Hall was a visiting writer at both Fairmont State College (1993) and Georgia College (2004), and he served as U.S. Poet Laureate from 2006-2007.

Donald Hall was my teacher at the University of Michigan. We stayed in touch for many years after he left. He wrote me my first letter of recommendation: "Lyn Coffin has been reading everything in sight from the age of two. If I were going to hire anyone to do anythng Ms. Coffin wanted to do, I'd hire Ms. Coffin." Your tribute to him is one of the main reasons I'm coming to Portland. Thank you for paying tribute to a great poet and a great man.