Why Are You Here? 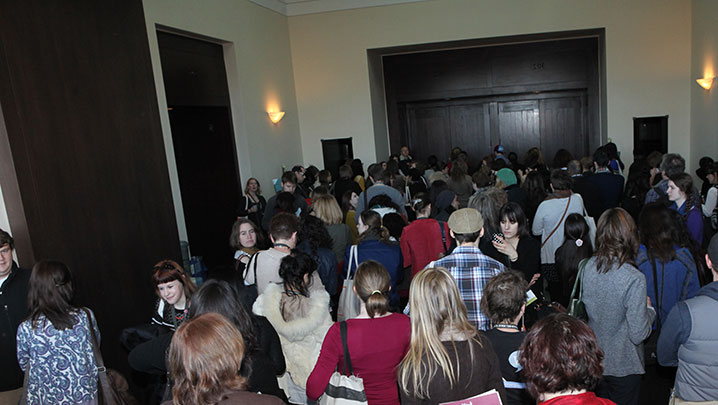 I got an email today from a former undergrad who recently embarked on an MFA. He’s excited about his classes and the upcoming readings and the chance to work on a lit mag and all there is to do in the oh-so-wonderful city he’s living in (rhymes with Zhivago). In other words, he’s diving into his new life like a bat out of hell. (Sorry. I’ve wanted to write that stinky sentence for years.) He’s young and stoked, and I’m older and stoked that he’s young and stoked, but I’m also struck by what he didn’t mention in his email—his writing.

Which raises an interesting fact: if you’re not careful, being in an MFA can get in the way of writing. Given all you have to or might want to do, the easiest thing to push aside is your writing: it’s a variable, in amount, whereas most other things are fixed. Want to dump pedagogy (I know—of course not)? Have no interest in forms? Too bad. But beyond the stuff you have to turn in for workshops, there’s little compelling you to do what you’re there to do, ostensibly, in the first place—furiously and gorgeously write your ass off.

I see it happen fairly often. People get bogged down in course work and teaching. Some because they’re Type A types, some because they’re smushed by the totality of the work, some because they’re hiding out anyway and are afraid of truly trying to write. What’s sad about this is that the real boon of an MFA isn’t the degree itself or the teaching experience but the chance to exist publically as a writer, to really try on those shoes (wingtips, in my case), without having to justify the whats and whys of your decision, of your life. MFAs are where American writers find their tribe. I love that, just as I love that we all know the degree means nothing, that it is, by itself, a puff of smoke. If you’re a student in an MFA program, it should be because you want to be a writer, not because the degree will land you a job.

I once started a grad workshop by asking, how many of you want my life? By that I didn’t mean my social discomfort and glabrous dome. I was asking how many wanted to publish books on a regular basis and teach a 2-2 load while arrayed in the glories of tenure and a parking space. Surprise—everyone raised their hand. I then made the point that the only way to get that life is to write well and succeed publically at writing well and that the rest of it, meaning most of what they would be or had already been asked to do, has to be subservient to that goal.

So I tell students their vocational and academic development doesn’t matter nearly as much as their artistic progress and joy. Do all that’s asked of you, yes, but remain clear on what you need to demand of yourself, which is sitting down at a desk as often as you can. I wrote poems for twenty-five years and didn’t think of teaching until I was offered a visiting poet gig. I didn’t have an MFA at the time and still don’t have an undergraduate degree. While it’d be silly to advocate that path now, I’m worried by what I see as a growing tendency in the MFA world to stress the "professional" side of things—CVs and interview skills, internships, and composition classes—over the artistic. I hate to think of these two or three years being about anything other than you hanging out as a writer with other writers and pushing each other to be better and weirder and quieter and whatever -er thing you want to be, denser or cleaner or dreamier in your work, I worry that we’re trying to smooth out the mess and the roil and the fun of learning to write in favor of creating academics, which is a categorical mistake, the putting of a hand into a sock.

Zhivago, when he was here, came around to talk about his poems. That’s what we did—he wrote poems and I talked about the poems he wrote. He was geeked about this, and I loved seeing that in him, and I love seeing that in all the undergrads who show up with amazing poems and grow about a thousand feet taller when told their poems are amazing. It’s the best part of the job and why doors in English departments need to be so big, though, weirdly, it’s a much rarer experience with grad students. I think it’s something we do to them—or the desire to be hip does, or the context—or I wish I knew how it happens, but it happens that something stiffer and less fluid enters the process, and I hate it and want it out.

There’s another student I worked with who just started his MFA. His emails have been mostly about his poems and writing poems, and, yes, there was too much scotch one night, which led to more poems, poems of embarrassment and apology but poems poems poems nonetheless, which means he’s being, from my perspective, an excellent student. He’s reading his Neruda or whatever and doing his praxis or whatever, but the thing that motors him on is meeting the growing shape of his mind on paper. I suspect it’s the same for Zhivago, as I hope it’s that way for you. The truth is you can learn to write on your own, but the programs speed your development if you let them, if you keep your writing where it belongs, at the center of school and your life.

Among the nightmarish examples of formal study stultifying the writer's creativity: check this out from the book So you want to be a Playwright by Tim Fountain - "Because of the unwillingness of theatres in the United States to take a punt on new writing, many new American plays are endlessly workshopped and rewritten in arid university environments, and as a result arrive lifeless on the artistic director's desk. The initial passion that drove the play on - however dogmatic, however oversimplistic or however vengeful - has been destroyed and what you are left with is a very dry exercise....I think this is why many successful plays are thought about long and hard, but written very quickly."