From Workshop to Marketplace:
How to Find the Right Readers 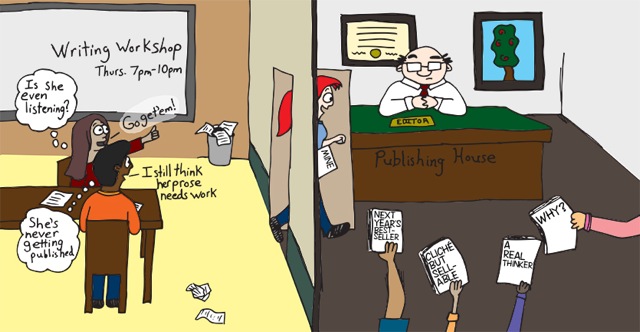 I recently took part in a strange-but-instructive event called “Literary Idol” at The Muse and the Marketplace conference in Boston.

Here’s how it worked:

A bunch of relatively inexperienced writers were invited to submit the first page of their manuscripts.

As the “host” I selected a piece at random and read it out loud to a panel consisting of three agents and an editor, who were instructed to raise their hands as soon as they lost interest in the manuscript. As soon as two of the four panelists raised their hands, I stopped reading and the panelists discussed why they had lost interest.

Of the thirty or so manuscripts I read, only four survived—and those just barely.

I could read the dread and agony on the faces of the writers in the audience, as the panelists dismissed one submission after another.

And why were these pieces being dismissed? Because the prose was overwrought or clichéd. Because the panelists were confused as to what was happening. Because they just didn’t like manuscripts about cats.

It was a pretty brutal exercise.

In the workshop, after all, it is the given duty of each participant to patiently read each manuscript and offer constructive criticism.

In the marketplace, on the other hand, all you are owed is an acceptance or a rejection, and the latter often comes with no elaboration, or an elaboration as unhelpful as “I don’t like manuscripts with cats.”

The real issue here has to do with feedback, and how to make sure that you’re getting enough positive reinforcement to keep you going, and enough insightful criticism to keep you honest in your revisions. You have to find a balance, in other words, between the brutal and tender.

Here’s the thing, though: this balance is different for every writer. It has to do with our ambitions and our patience, with our individual temperament.

During the many years of my apprenticeship, I wrote hundreds of stories, many of them wretched, and sent them out en masse. In the past, I’ve told students I did this because I was a former journalist, and I was “used to being published.”

The truth is a little uglier. I was basically an insecure wreck, and thus desperate to have someone in the “real world” affirm that I was a worthy writer, which, to me, meant having a literary magazine publish my work.

The result is that I wasted thousands of hours writing bad stories and sending them out to dozens of magazines. It was the good old buckshot approach. Every six months or so, some poor journal editor would take pity on me and publish one of these things, probably in the (deluded) hope that this might stem the tide of insufferable Almond submissions.

If I’d been a bit more patient, a bit more able to find affirmation in the work itself, I’d have spent more time working on fewer stories. And I’d have had the good sense to show these stories to my own readers before sending them off to strangers.

Obviously, it’s easy to look back and see these things.

But most aspiring writers struggle with the same essential crisis. In fact, I’d argue that the narcissistic temptations of the Internet (where everyone can “publish” simply by posting) have made aspiring writers even more impatient for affirmation.

To this end, I have three pieces of advice:

Figure Out What Kind of Feedback You Need to Keep Improving

A lot of folks will tell you that the most important rule is simply to keep your ass in the chair. I agree, but only in part. The truth is, you have to keep learning, too.

And that means you have to do more than finding an Amen Chorus to tell you how great your novel is, and to commiserate with you about why the rest of the world doesn’t see this.

You need to find readers who recognize what you’re trying to do, and where you’re doing it well, but who can also identify your blind spots and lesser decisions. And who can deliver this vital criticism in a constructive manner.

I’m not going to pretend it’s easy to find such readers. It’s a rare, true gift. One of the enduring benefits of enrolling in an MFA program is to find such readers. That’s certainly the best thing to come out of my MFA experience. But you can’t expect wise, compassionate readers simply to drop into your lap.

On the contrary, it is a privilege to have someone give your work sustained attention, one you generally have to earn by doing the same for them.

This, it turns out, is good news. Because the act of critiquing isn’t just some act of generosity. It is, in my own experience, how most inexperienced writers learn to write.

To look at the work of your peers, and learn how to explain with kindness and precision, the nature of their mistakes is, in fact, how you learn to diagnose your own work.

If You Can Stand It, Play the Long Game

What I mean here is that you have to remain committed to the ultimate goal, which isn’t to win the immediate approval of the online world, or dazzle a workshop, but to improve your storytelling day by day.

But your own commitment has to be to the process of improvement, not to the anticipated reward.

If it’s any consolation, I’m still working on this final lesson.

Steve Almond’s new book, Against Football, will be published in September.