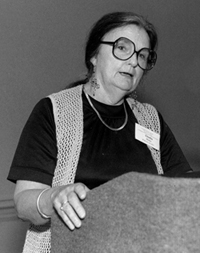 Doris Betts, author of six novels and three short story collections, died of lung cancer at 79, at her home near Pittsboro, North Carolina on April 21, 2012. She was professor emerita at the University of North Carolina at Chapel Hill, where she taught for thirty-two years. Her writing drew comparisons to Flannery O’Connor. One of her best-known works, the short story “The Ugliest Pilgrim,” was made into the short film “Violet” which won an Academy Award. Her professional accolades include, among many others, a Guggenheim Fellowship, the American Academy of Arts and Letters Medal of Merit, and the Southern Book Award.

“No one who knows her life’s work and is familiar with the marvelous pantheon of living North Carolina writers would contest her place as First Lady if not President of them all,” said her colleague, Marianne Gingher, after Betts won UNC Chapel Hill’s highest honor in 1999.

Betts also received AWP’s George Garrett Award for Outstanding Community Service in Literature in 2008. She was honored in part for her service on several philanthropic boards, including AWP’s Board during the association’s formative years, back in the late ‘60s and ‘70s. She gave the keynote address at the 1996 AWP Annual Conference in Atlanta. The following, comes from the conclusion of her address:

We’ve all been students and teachers in workshops of varying success—some too glib, others too esoteric—but once in a while free discussion will turn into such a tangle of fire and tongues and doves that we become drunk on words all over again, animated, if not by the Holy Spirit, perhaps by the muse Calliope. When that happens, we don’t give a hoot about the state of the publishing industry; we turn again into zealots, since we professional writers are all just former amateur writers who wouldn’t take no for an answer.

If we cultivate a faith that every student’s writing can improve, it’s because time and practice have kept improving our own.