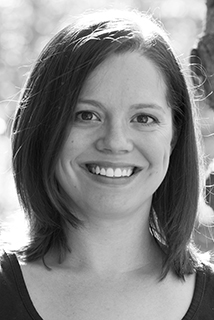 About: Traci Brimhall is the author of Our Lady of the Ruins (W.W. Norton, 2012), winner of the 2011 Barnard Women Poets Prize, and Rookery (Southern Illinois University Press), winner of the 2009 Crab Orchard Series in Poetry First Book Award. Her poems have appeared in The New Yorker, Slate, The New Republic, New England Review, The Believer and twice in Best American Poetry. Currently, she is an Assistant Professor of Creative Writing at Kansas State University.

Find Traci in the Directory of Members

There are many different ways to lift up the work of other writers—and just as many reasons for wanting to do so. This month, In the Spotlight features one AWP member’s resolution to become a more thoughtful and active literary citizen.

I don’t remember when I wrote my first poem, but I remember when I first started to call myself a poet. That claim came from great need. I’d come to a point in my life when I needed to love something with intensity in order to change myself and my life. Though I have loved other human beings, no love to that point could rival the over-the-top, hungry, unquenchable love I felt for poetry at the time, nor had any love transformed me in quite the way that my poem-love accomplished. It was a devout love, an honorable (if over-enthusiastic) love. It was, dare I say, a selfish love.

And then, as years passed, this love did what some loves can do—it became a bit of a monster. It became a needy love, a greedy love, an unsatisfiable beast of a love. It became as toxic as a pop song about love. Instead of being an art that I served with pleasure and terror and more than a little awe, it started to become a way that I would be hard on myself. Of course they would reject that poem; it’s terrible, something would say. Or: Who the hell do you think you’re kidding? And my worst voice: Your best writing is behind you. Give up now.

Deep down, I still knew poetry was fucking amazing, but I didn’t know how to fall back in love with it. One of my friends told me that it was okay to stop writing for a while. She said: You don’t have to want to be alive all the time to keep living. That statement radiated. I’ve lived its truth. But damn, it’s so much better when the living feels alive.

Somewhere along the line, my love of poetry became more about taking than giving, so I decided I had to change how I was loving it. I made the resolution this year to make my 2016 about other poets. For a long time I was pretty lucky in love. I’ve moved to places where communities were ready-made or easily created. I’ve found others in online forums—like-mindedness, support, belonging. I haven’t had to be a maker in this way before. I’ve joined the AWP mentor program as one of my ways to try and support other writers, but I also hope to do things on a local level to create more community in my own town. Like all fantasies of a love’s future, I can’t be sure if a reading series will take off, or if a free workshop will be well-attended, or if any of it will make a damn bit of difference to myself or anyone else. But I believe love thrives on generosity. I don’t need my love to return to that first bright rush, but I want to have the companionable love, the inside joke love, the morning breath love. I want to wake up next to it and know it will go on for years to come, that the poems will come. It’s not time to give up; it’s time to give more.
Nominate a Member