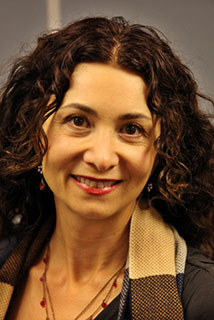 About: Poet and literary translator Sholeh Wolpé was born in Iran and grew up in the Caribbean and Europe before settling in the United States. She is the author of three poetry collections, Keeping Time with Blue Hyacinths (forthcoming, March 2013), Rooftops of Tehran, and The Scar Saloon; a book of translations, Sin: Selected Poems of Forugh Farrokhzad; and editor of two anthologies, The Forbidden: Poems from Iran and Its Exiles and Breaking the Jaws of Silence: Sixty American Poets Speak to the World (forthcoming, March 2013). She is a regional editor of Tablet & Pen: Literary Landscapes from the Modern Middle East and also a contributing editor to the Los Angeles Review of Books.

Find Sholeh in the Directory of Members

Who is your favorite literary character?
Oskar in The Tin Drum, by Günter Grass. He is a complex, tragic, funny, unpredictable, and ever-evolving character.

Your favorite literary line?
“The real voyage of discovery consists not in seeking new landscapes, but in having new eyes,” Marcel Proust.

What are you reading right now?
Several books simultaneously (which is something I often do). The books of poems I have out are Pleasure Dome by Yusef Komunyakaa, Far Side of the Earth by Tom Sleigh, and Every Seed of The Pomegranate by David Allen Sullivan. This last one is about the war in Iraq and was sent to me by the author. For fiction, I’m reading The Blood of Flowers by Anita Amirrezvani, which is about a young woman facing her fate in seventeenth-century Persia. And for nonfiction, I have just picked up The Hidden Reality by Brian Green, which is about multiverse, as opposed to the universe. Fascinating.

Do you own an e-reader? How has it changed your relationship to books?
I have an iPad, and, yes, I have bought and downloaded many books on the device, an act that has more to do with my uncontrollable addiction to buying books than my e-book reading habits. I prefer a real book—something I can hold in my hands, shine a light on, flip the pages of, and write in its margins. As for poetry, I don’t think e-books can be trusted to format it correctly. However, e-books are marvelous for nonfiction because you can underline and categorize and easily retrieve information.

What do your books look like once you’ve finished reading them?
Some people say one must respect books and not write in them. I guess in that regard I am shamelessly irreverent. I write in the margins, underline passages, and dog-ear my favorite pages. It’s the only way I can go back to the conversations I've had with these books.

When you give a book as a gift, do you write an inscription?
Doesn’t everyone?

Who encouraged you to be a writer?
I am the only writer in a very large family of doctors, dentist, pharmacists, and business geniuses. They are an amazing bunch but they don’t know what to make of me. I have been their scandal maker, rebel, and the unpredictable child who became even more capricious as a woman. No one really encouraged me to write; in fact I was often discouraged. Perhaps that is exactly what I needed to plow ahead.

Describe your writing process.
When I’m working on a project with a deadline, I don’t get out of the house for days. I don’t see anyone. Complete isolation. I listen to a set of CDs, called Nighttime Classics, over and over. It’s music from Dvorák, Schumann, O’Hara, Ortiz, and many other masters. These particular pieces are so well absorbed by my mind that their beauty does not interfere with my creative process. I’ve never really had a writer’s block. My problem is not having enough time. I make notes or write extensively in notebooks. Then, when I find a good stretch of time, I go back to them. Sometimes the best notes or poems are the ones I have no memory of writing. It is as if they were dictated to me. It’s a strange experience. It’s like revisiting dreams you had forgotten you dreamt.

What is your favorite thing to do when you should be writing but just can’t find the motivation?
Lajos Egri in The Art of Dramatic Writing makes a great point about the creative process. He writes, “The sun, along with its other activities, creates rain.” I love quantum physics, comedians, opera, eating watermelon, theater, the game of Pente, and many other things including a crazy attachment to the color red. All this makes me the writer that I am, and so long as I keep myself whole and connected to what fascinates me, my motivation to write will remain intense.

What are you working on right now?
I am co-translating (with Mohsen Emadi) Walt Whitman’s Song of Myself into Persian. It is part of a beautiful and timely project sponsored by the International Writing Program at the University of Iowa. The project's website was launched three weeks ago. They are releasing the poem one section per week in eight languages. You can also hear me read each section in Persian. The work has been challenging and exhausting, but also very rewarding.

I’m also revising my play Shame, which is about two Muslim Iranian-American sisters and a man who is in love with one of them. Through the course of the play, they all come to terms with their own sexuality and personal freedom under the ever-present cultural umbrella of "shame" and "virtue."  The play is going to be performed in Los Angles as a staged reading for prospective producers. And I’ve been busy blogging for Best American Poetry for a week this month.

Share a favorite AWP conference moment.
My favorite moment repeats itself over and over every time I see a friend I haven’t seen since the last conference walk toward me with a big smile.