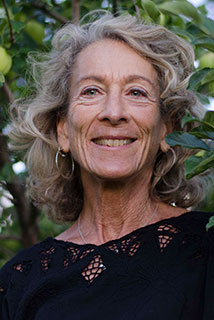 About: Leslie Ullman is a poet, essayist, and faculty member at Vermont College of the Fine Arts. Author of four books of poetry, her latest book is Library of Small Happiness, which features essays, poems, and writing exercises and innovations. While at University of Texas-El Paso, Leslie established the Bilingual MFA Program. Her awards include the Yale Series of Younger Poets Prize, the Iowa Poetry Prize, the New Mexico/Arizona Book Award, and NEA Fellowships.

Find Leslie in the Directory of Members

If you could require all of your students to read only one book, which would it be?
Since I'm now teaching only graduate students, I feel fine about assigning them Gaston Bachelard's The Poetics of Space. He shows us how to read as a dreamer, as a co-creator in imagination as it interacts with the image. I think this how most writers first learn to use their reading to energize their own inner lives, as opposed to using their reading to obtain information. The fact that Bachelard, a philosopher of science, could read with such abandon and openness, and then document his experience of surrender and illumination, just blows me away. He read as a poet.

For all my students, including in my days of undergraduates, I like Suzi Gablik's monograph, Magritte. The reproductions instantly show the power of the image, and her analysis of how Magritte achieved his fusions and juxtapositions applies 100% to poets. Students at any level have to experience, and then feel they can make, magic. These books show it in different ways.

What is the best writing advice that you dispense to your students?
Show up and wait. Get something down on paper, anything, and then let it talk back to you. It's amazing what can happen if you start listening to your own words, images, rhythms of language, and then let them guide you into other experiments—expansions or variations, new associations—and eventually lead you to a place you didn't anticipate going. This is particularly applicable to poets, though it probably also applies to the lyrical essay and to forms of fiction that are not too narrative-driven. The point is that letting your own language guide you, letting it spark new associations and patterns, can often lead to a more fruitful outcome than starting off with too much of an agenda. That's where "show up and wait" comes in—first, it's quite all right to sit there and relax into the silence of the blank page, feeling no pressure to do anything. Eventually something happens. It's difficult to trust this, but it works.

Can writing be taught? Why does creative writing belong in the academy?
It can be coached. Not lectured about. The trick is to get writers going, and then the "mentor" has something to respond to. In my experience, it's better to respond to what they offer on the page, rather than directing them too much to what to put on the page. I do believe in writing exercises, to give writers structure. But I also want them to feel free to listen to themselves more than to me. Once they've drafted something, I can show them what's working, what has unrealized potential, what may want further development, and what may be unnecessary. Then I ask them for their responses to my response. I think this kind of coaching and collaboration an be offered both in and outside of the "academy." I discovered this was the right teaching style for me while working in the academy. Lately I also teach skiing, and I'm astonished to discover teaching writing and teaching a physical skill are not so different. In both cases, one has to "read" what the mentee offers, be it a piece of writing or body movements and descriptions of their fears and aspirations. Then, as a mentor, I can suggest individualized moves, fixes, experiments, and work in dialogue with what comes out of that. It's never boring, never repetitive. Each new piece of writing is its own universe suggesting its own potential laws and cause-effect connections. I offer my suggestions in a speculative manner, inviting the recipient to test them rather than swallow them whole.

If you could meet any writer, who would it be? What would you say to her or him?
I have met Tomas Tranströmer, but if I could meet any writer I would love to meet with him again. And take a walk with him, here in New Mexico, and take in how he witnesses the light and landscape. I have no doubt I would learn something, see it freshly, as I did when he and his wife Monica visited my desert home in El Paso thirty years ago. Usually, hosting visiting writers in those days, I was relieved to put them on a plane, but in their case, I was sharply sad to see them go. I wish I had them back. He was so very present, observant, generous. Images arose as naturally from him as breath.

What do your books look like once you’ve finished reading them?
Dog-eared, underlined, spines softened and supple. I'm reading a borrowed book now, and I find my efforts to keep it looking undamaged require mindfulness and restraint.

Do you feel influenced by your peers to produce a certain type of creative work, or do you feel free to follow your own interests and passions?
Like most writers, I have experienced pressure to avoid certain pitfalls, especially the much-touted risks of Sincerist poetry. But as I've gotten older, I want simply to feel enlivened, expanded, awakened by my writing sessions. And this has very little to do with an awareness of others at first. Of course I want to reach an audience, but I don't worry too much about them until I'm in the finer-tuning stages of revision. And I have trustworthy readers whom I rely on, though I don't want them in my face right away, in that sacred, exploratory space of drafting. I want this for my students as well. But I would NEVER send a poem of mine out or consider it finished without running it by trusted readers.

Describe your writing process. Do you write every day? For how long? Do you listen to music? Do you type at a computer or write in longhand?
I have learned to accept stillness, a feeling of doing nothing, as a prelude to starting a new poem. Once I get something down, I start listening to it, conversing with it, expanding it, putting brackets around weak phrases or words I hope to replace, and allowing myself any tangents that come up. Mornings are best for this—mornings when I know I don't have to go somewhere, so they can extend into the middle of the day if the reverie lasts that long. I allow myself to get up often and come back. Oddly, though I dislike reading things on a computer and find it messes with my concentration, I have the opposite experience when composing on the computer. Then the work just draws me in, and I can make instant changes that help me discover more quickly where a piece wants to go.

Would you like to share a project you are currently working on?
I am working my way through the 112 "Oblique Strategies for Composers Who Are Stuck," originally composed into a deck of artistic, rather pricey cards (like Tarot cards) by composer Brian Eno and artist Peter Schmidt in the mid-1970's. Each "strategy" is quirky and only vaguely comprehensible, like a rough translation from another language, and I'm using each as a title for a poem. My plan is to write off of all of them and then cut about half. The strategies were originally designed "to encourage lateral thinking," and they're certainly doing that for me. They're also encouraging me to think and write about music, and about the creative process in all its tricks and mysteries. They have led me down avenues I never would have expected, and I like that even the more personal ones seem to be finding a realm beyond the personal. I'm now working on #50.

How has AWP helped you in your career and/or creative endeavors?
Rather hugely. First, the essays in its publications (now The Writer’s Chronicle) informed and supported me as a writing teacher and then later as an essayist. In 1996 I was particularly blown away by Claudia Johnson's essay, "The Other Side of the Story," which gave me a paradigm for discussing not only plot structure in fiction, but also patterns of connection/disconnection in poetry and creative non-fiction. For many years, the essays published by AWP felt just right, aimed at practicing writers who wanted to help their students become practicing writers as well. I also appreciated exposure to writers who were interviewed and/or quoted in its publications. And then, when I started writing essays of my own, most of which originated as lectures I gave at Vermont College, I aimed them at the AWP audience. It has been one of the biggest satisfactions of my career that the four I labored over with particular dedication, and then sent to Supriya, have been published in The Writer's Chronicle. I couldn't ask for a better venue.