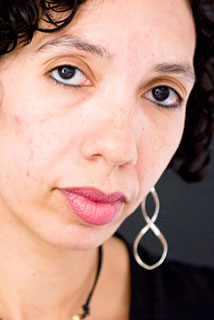 About: JP Howard, aka Juliet P. Howard, is a poet, Cave Canem graduate fellow, VONA alum, Lambda Literary Foundation Fellow in poetry, Astraea Lesbian Writers Fund grantee, member of The Hot Poets Collective, and native New Yorker. She curates and nurtures Women Writers in Bloom Poetry Salon (WWBPS), a forum that offers women writers at all levels a venue to come together in a positive and supportive space via monthly New York-based literary salons. JP's debut collection of poetry is forthcoming from The Operating System.

Find JP in the Directory of Members

What is your organization’s mission?
Women Writers in Bloom Poetry Salon (WWBPS) is a literary salon series, modeled after the traveling salons popular during the Harlem Renaissance. WWBPS was created with the goal of establishing a venue where women writers could come together in a supportive, creative, and nurturing space, and also produce new work. The Salon’s goal has been to serve as a forum for (mostly) women writers to network, while simultaneously serving an educational purpose. An integral part of our mission is to feature a different poet each month who facilitates a writer’s workshop, gives a featured poets reading, and sits for a Q&A with members. Our mission includes celebrating each poet in attendance by inviting her to participate in an open mic reading to close out the monthly salons. By including a delicious potluck component to our monthly salons, we ensure that we nurture each other both literally and figuratively.

What programs would you like to develop and create for your organization?
My nine-year-old son Nicholas is an emerging poet and one of my biggest Salon supporters. I would like to create programs in the future that encourage and celebrate all the talented child poets in our community. There has definitely been an interest in this, as so many of our Salon members have children.

If you were giving a tour of your city, what literary landmarks would you take your guests to?
I grew up in Sugar Hill, Harlem near 149th Street and Convent Avenue. My family had lived there for decades before I was born, so I would definitely choose some wonderful literary landmarks associated with the Harlem Renaissance. One literary landmark I would be sure to point out is 145th and St. Nicholas Avenue, where Paul Robeson and others had artist’s studios. I would also walk by various Harlem residences on St. Nicholas where one of my favorite authors, Zora Neale Hurston, once stayed, and I would make sure to stop by the Harlem YMCA on 135th Street, where Claude McKay and Langston Hughes both stayed at various times. While there, we would walk over to the Schomburg Center for Research in Black Culture, where I would have arranged for a guided tour in advance, so my guests could see the wealth of information and resources available at this Harlem treasure.

Who encouraged you to write?
My mom always encouraged and celebrated my poems from a young age. When I was about nine or ten years old, she would ask me to recite my own poems to the church ladies every Sunday, as well as the poem “For My People” by Margaret Walker, a favorite poem of mine that I had memorized. I was a very shy child, so this really built up my confidence to both write and perform poetry.

If you could meet any writer, who would it be? What would you say to him or her?
It would definitely be the late poet Pat Parker. I never had the opportunity to meet her when she was alive, and I first discovered her poetry when I was about 18. I would thank her for writing so bravely and honestly, and tell her that her poetry spoke directly to me. I would tell her how much I admired that she spoke out and wrote about feminist, racial, and class issues. I would let her know that she has remained my literary role model, as she was all about building community and celebrating diversity. I would tell her that reading her poems as a teenager gave me the courage to come out of the closet, as a lesbian, to my own mom soon after I entered Barnard College.