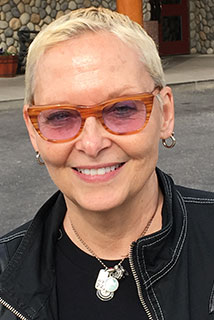 Director, Madwomen in the Attic; Host and Producer, Prosody

About: Jan Beatty’s fifth book, Jackknife: New and Collected Poems, is forthcoming in January 2017 from the University of Pittsburgh Press. Her last book, The Switching/Yard, was named by Library Journal as one of “30 New Books That Will Help You Rediscover Poetry,” and her other books include Red Sugar, Boneshaker, and Mad River, published by the University of Pittsburgh Press. Beatty hosts and produces Prosody, a public radio show on NPR affiliate WESA-FM featuring national writers, and directs the creative writing program at Carlow University and the Madwomen in the Attic Workshops, where she teaches in the MFA program. www.janbeatty.com

Find Jan in the Directory of Members

Tell us about the Madwomen in the Attic.
Madwomen in the Attic is a group of community and university women at Carlow University in Pittsburgh, ages 18–94, who study writing in a supportive yet intensive atmosphere. We currently have nine sections of Madwomen classes: six of poetry, two fiction, one creative nonfiction. We are consistently growing. We have Madwomen who have been members for over twenty years, many new members, and everything in between.

The Madwomen also sponsor the Madwomen Reading Series, bringing in writers such as Alicia Ostriker, Judith Vollmer, Patricia Smith, D. A. Powell, and many others. We sponsor the Patricia Dobler Poetry Award, a national prize for a woman poet over forty who has not yet published a book of poetry, fiction, or nonfiction. This year’s judge is Allison Adele Hedge Coke. We publish Voices from the Attic, a yearly anthology which is a juried collection of the work of the Madwomen in the Attic. Other programs include the Mad Fridays Reading Series and a Mentoring System. We also run a small press, MadBooks, which published eight chapbooks and four full-length books of poetry in limited edition.

What is your project’s mission? Its vision?
The Madwomen in the Attic value women’s work as writers, dreamers, and architects of society. We advocate for and empower a diverse community of women by creating a space for writing, the open exchange of ideas, and the reading and publication of women’s literature.

My vision for the Madwomen in the Attic is to continue to serve the underserved literary community of women writers, regardless of age, race, class, or education. In ten years, we hope to have a Madwomen Center, a national book prize, and a summer national workshop.

What does your community seem to want the most from your project?
Our community seems to want classes, mentoring, and guidance towards book publication. The primary focus is community and a place for women to create.

How did Prosody come to be?
That’s an interesting story. Over twenty-five years ago, I was invited to be a guest on a live poetry show hosted by Moe Seager, called “The Bards of Three Rivers.” I was a young poet, and I read poems that had some “objectionable” language in them (according to the FCC). I was unaware of this, since I had shown the poems to Moe ahead of time. The show was cancelled permanently that day. There was a letter-writing campaign in the Pittsburgh Post-Gazette. I learned a lot about censorship and that not all artists are first amendment supporters.

About a year later, Prosody was founded by writer Mary Radford on WYEP-FM, 91.3. Poet John Schulman shared co-hosting duties with Mary for several years. John asked me to tape the first show as a gesture of goodwill. About a year after that, I started filling in as host for the show. I’ve been hosting now for over twenty years.

What is Prosody’s mission?
Our mission is to bring the work of contemporary poets and writers to the world of listeners. Prosody now airs every Saturday morning on listener-supported WESA, 90.5 FM. We are Western Pennsylvania’s only regularly scheduled radio program featuring contemporary poets and writers. WESA is an NPR affiliate, with transmission reaching into Pennsylvania and surrounding states. Prosody can be streamed on the web at wesa.org on Saturday mornings from 6:30–7:00 a.m. But, for people who sleep in, Prosody is podcast on www.prosodyradio.net.

Prosody's community partnerships have included a Symposium on Women Writers of Color, funded by Pennsylvania Partners in the Arts and featuring the writers Toi Derricotte, Fiona Cheong, and Yona Harvey. This symposium included a roundtable discussion on issues of race and creativity. Local guests on Prosody are also showcased in print in Chapter&Verse, a feature of City Paper.

What is Prosody’s vision?
Well, we have some terrific writers on staff. For about ten years, the wonderful writer Ellen Wadey was a fiction/nonfiction host for the show. She would drive from Chicago to tape shows, going above and beyond.

Now we have a new fiction/nonfiction host in Jane McCaffery, a terrific fiction writer. We also have a poetry co-host in Laurin Wolf, who is a great poet. For sound engineers, we have the very skilled and dedicated Lisa Alexander and Michelle Stoner—also both terrific poets. I have found that writers are the best listeners and editors.

No one gets paid to do the show—it’s a labor of love. We are ready, though, to secure some funding for the show to support this work and further programming.

How have your outreach efforts changed over the last five to ten years?
It has been amazing to see the show’s growth in the past years. We have grown to be part of panels at AWP, which is great. We have been the focus on panels at Split This Rock. Prosody is now being used in classrooms around the country, as a teaching tool. This growth has happened through word of mouth, and through our podcasts.

Describe the region where your organizations are housed. What is the literary community like?
The literary community of Pittsburgh is like no other. There are readings every night of the week. And here, unlike in many cities, we have a communication between the university and the community writers. We have the University of Pittsburgh Press, Autumn House Press, Carnegie Mellon Press and a number of independent bookstores. The Pittsburgh Poetry Review is a new, vibrant literary journal.

If you were giving a tour of Pittsburgh, to what literary landmarks would you take your guests?
I would take people to the heart of the city: to the South Side, where the steel mills used to be; to the Hill District where the Crawford Grill used to be; to Primanti’s to eat a real Pittsburgh sandwich; for a drive along the river between South Side and Homestead to hear the trains, feel the air; to the Dirty O to see what happens.

Who encouraged you to be a writer?
I was tremendously encouraged in graduate school by the amazing poets Ed Ochester, Lynn Emanuel, and Patricia Dobler. I didn't find encouragement at Iowa, where I started graduate school—and so I left, sure that my working-class voice would be unheard there.

Do you feel influenced by your peers to produce a certain type of creative work, or do you feel free to follow your own interests and passions?
I am influenced by other writers who are not speaking up, to write the thing not said, the unsayable words that offend, repulse, and open gates to inside worlds.

Share your favorite memory from your desk.
Looking up to see my father’s diploma, his GED—that he finished at sixty-one years old. Remembering his pride, where I came from.

How has AWP helped you in your career and/or creative endeavors?
I don't like the word “career.” I think that we are making art and hoping to change worlds. AWP has given me a place to connect with writers, to see people who are wonderful, energized, flawed, and intense in their work. In the midst of the confusion and ambivalence that comes with growth, it has given me great encouragement and hope along the way.

What other projects are you currently working on?
Individually, my new book, Jackknife: New and Selected Poems, is coming out with the University of Pittsburgh Press in January 2017. I’m also looking for a publisher for my book of leaping essays on adoption called American Bastard.

What is the greatest compliment that you could receive about your writing?
That it moved someone emotionally, that it made someone feel that they could be on planet Earth and walk around.