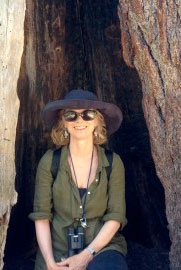 About: Brenda Hillman is the author of ten collections of poetry, including Loose Sugar, Cascadia, Pieces of Air in the Epic, Practical Water, Seasonal Works with Letters on Fire, and her most recent book Extra Hidden Life, Among the Days. In 2016 she was named Academy of American Poets Chancellor and has also received the Academy of American Poets Fellowship, the William Carlos Williams Prize for poetry, and fellowships from the National Endowment for the Arts and the Guggenheim Foundation. Hillman teaches at St. Mary’s College where she is the Olivia C. Filippi Professor of Poetry; she is an activist for social and environmental justice.

Find Brenda in the Directory of Members

Can writing be taught?
Yes, it most certainly can be taught.

Why does creative writing belong in the academy?
I’ve never understood why this is in doubt. The “academy” has gotten bashed since the early twentieth century by people who have been afraid of modernist art, of educated readers, and of certain styles that are less populist. A false binary was created between the “common reader” and “the highly educated reader.” University and college classrooms are great places to read inspiring literature and to create it; good writing also belongs at bus stops, in offices, in the streets, in secret societies, in crowds, in bars and on people’s phones. I simply don’t understand the bias against “creative writing programs”—are people afraid of too much writing? Do people think university programs produce generic writing? They do not. They definitely produce more writers, but wouldn’t we rather have more writers than bombers? Writing gives people pleasure not available to them in other areas of their lives and if they don’t find their models in the MFA programs, they can certainly make life long connections so they will be less horribly lonely in an American culture that devalues art.

What is the best writing advice that you dispense to your students?
Writing has so many pleasures and woes. I feel committed to trying lots of things from my heart and head, and then throwing away most of it. The adrenalin of happily creating first versions/drafts can’t be confused with finishing work you think will last and you will be proud of. I often will return to a poem over and over because it is not yet in the zone of its initiating impulse, but rather has been the product of false pride. Also, I want to keep learning things, pushing myself to get better, and so I use my intuition and the poems I love as inspiration.

Do you feel influenced by your peers to produce a certain type of creative work, or do you feel free to follow your own interests and passions?
No, I do not feel influenced; I feel like a person who has always been pretty out there—a stubborn, reasonably high energy person who is whacking the foliage aside to clear the way for the young writers or older emerging writers or for those who do not yet know poetry can give them something that nothing else will give them. In the 80s I was dissatisfied with existing models, and I’ve been trying to make/find a path I did not have myself at certain times; sometimes I have to synthesize my own models, especially in terms of experiments with style and certain subject matter, like putting abstraction, politics, science, family stuff, and weird religion in the same piece of writing. When you look for your models some of them may be dead, and of course Dickinson and Blake are two of mine. Beloved C. D. Wright was a great sister, bringing things into relation. Often the literary establishment doesn’t reward the iconoclastic work and tends to favor more traditional writing, so you might sacrifice having a mainstream readership or prizes. But making a writing practice as part of a path of spiritual and aesthetic freedom has been the choice for me, and so as an educator and poetry mother, I try to encourage those things in others.

When do you find time to write? Do you write every day? For how long?
Yes, I write every day, from 30 minutes to several hours in the morning, very early. If I don’t find the time I create it from nothing.

Describe your writing process. Do you listen to music as you write? Do you type at a computer or write in longhand?
I do not listen to music, and I write mostly longhand with a mechanical pencil. I’m very fetishistic about which pencil type. For the last couple books, I’ve been in love with Pentel mechanical pencils with #9 soft leads. I do a ton of erasing, and with the Pentel, the eraser is so small I have to use an outside eraser, which means carrying the little “kit” in a bag together. No problem with that. Then the question is always whether to get fixated on one particular pencil or just on the type of pencil—a real dilemma. In writing Seasonal Works, I had one particular Pentel, but now that I’m a little more forgetful, I have bought a couple of my favorite kinds in case one is misplaced.

What has been the best experience of being part of a creative writing program?
I teach both undergraduates and graduates at Saint Mary’s College of California. I love teaching, and teaching at that particular school has had an immeasurable influence on my writing in several ways: I love the freshness the students— they are often very eager for poetry, and the MFA not only attracts students who are interested in a beautiful range of writing but is a very inclusive, hard-working program. Secondly, we have a lot of intellectual range and freedom at the school, so I’ve been able to teach everything from Dante to Gertrude Stein. And one of the main things has been that teaching in the gorgeous Bay Area hills has help me develop a style of cross-disciplinary West Coast poetry that emphasizes ecology, politics and spiritual life. It’s one of the best places in the world to be a poet. That is why I’ve stayed, despite opportunities to leave.  I hope I’ve given as much back to the students as I’ve gotten as a writer.

Would you like to share a project you are currently working on?
I began a long prose rant in response to a political question a young man asked me at a party. I’m still going on it—it’s getting to be a series of letters. I was thinking of Rilke writing to the young poet, only much, much more confused because I feel I have fewer “answers” as I go along. Some of my letter has been translated into German as well.

How has AWP helped you in your career and/or creative endeavors?
I love seeing friends and dear writers and hearing the great programs. It is a little hard to navigate everything you want to do because of the simultaneous programming, so you have to be selective. I end up taking a huge number of notes at the programs and come back with so many ideas.

In fact, I met Alison Granucci of Blue Flower Arts Literary Speaker’s Agency at the AWP conference— she saw me read and asked me after the reading if I’d like to join her agency. It was in the very beginning of the agency: I think she was working by herself and just starting to put together her list. That was a very lovely experience, as poets aren’t used to having that sort of thing happen, but I’ve been working with BFA ever since. Alison is a fierce advocate for a wide range of writers, and she has a lovely staff.

What would be your advice to new AWP members on how to make the most of their membership?
Pace yourself, be selective, have a full experience wherever you are and don’t worry that you might be missing something. You’ll get something wonderful from many different encounters. Now, at this moment in our national situation, it’s extremely important for writers to come together; we need each other.